Today Cameron and I went to find the new formation at East Kennet, the first of the year in barley crop. 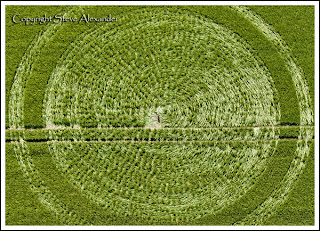 From our cottage it was a short journey of just seven miles but one packed with fabulous sites on the way.
The Cherhill White Horse was the first to be seen, gleaming in the bright sunshine of this May afternoon. Only a mile further on and completely unmarked except for the layby parking sign was Knoll Down, the sacred grove of trees that marks the tail of the Avebury Landscape Serpent. Crossing Beckhampton roundabout, with the Beckhampton long barrow hidden off to the left, we ignored the road down to Avebury itself and took the Marlborough road. Very soon the colossal figure of Silbury Hill loomed large in front of us, majestic and awe-inspiring in any weather, and today looking resplendant in her new green cloak of fresh spring grass. 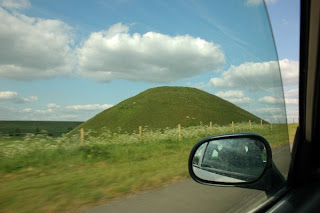 No sooner do you pass Silbury than the outline of West Kennett long barrow can be spotted on the hill crest to the south. This area is packed with sacred sites around every corner but today we're not stopping or we'll never get to the crop circle!
We had a pretty good idea of which field the circle was in from the aerial photos on Crop Circle Connector, so we turned off down a side lane and crossed a charming bridge over the River Kennet. 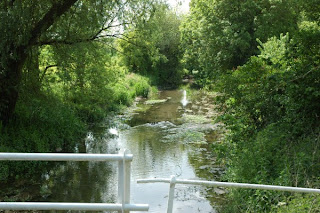 All of these places have stories to tell but that will be for other blog entries, today we contented ourselves with watching mum duck and her brood of chicks enjoying their watery home. A nearby Hawthorn tree in full bloom confirms that Spring is in full flow here. In some country regions this tree is still referred to by its other name - the May. I smile at the sight of this because every year when I was little my aunt would remind me of the country rhyme "Ne'er shed a clout 'til May's out!" meaning don't discard your winter clothing until the May blossom is out. This straight lane called Gunsight Lane ends at a farmyard where we know we can park right by the field, and as we park we know we're right because there's a car here with dutch licence plates and we see two people in the middle of the field. I suspect its the dutch researcher Bert Janssen as he was the one to initially report this circle. This field has had other circles in recent years including the yin/yang formation and the famous Mary earth energy current associated with the St Michael leyline passes through here on her way from West Kennett Longbarrow to the Sanctuary. Round the back of a small brick barn we enter the field and follow the tramlines (tractor trackways) through the crop, you should never walk through standing crop itself. Oh what a treat to be back in a field of young barley again! 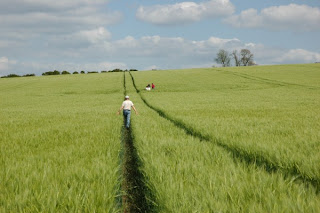 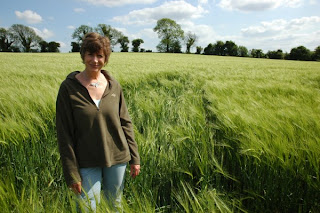 In our opinion its the most beautful of all the crops to be blessed with crop circles. The whispy tendrils that  flank the seed heads are so soft at this time of year and they create the visual effect of walking through waves when the wind is blowing. There's no wind today, just glorious sunshine and I notice that all the barley heads are angled over to the east, to the rising sun? I make a mental note to check other fields to see if this is always the case with barley. Reaching the crop circle just 100 yards into the field we greet Bert and his American wife Heather and compare notes. Bert is keen to show us something he's never seen in a crop circle before, a white powdery substance on just the twenty standing stems that mark the centre of the formation. We've never seen this before either. Rubbing a little between my fingers this odourless substance felt gritty or crystalline and seemed to be held together by gossamer like threads, in appearance almost like cobwebs dusted with icing sugar. Bert took some samples to have analysed in a laboratory, so we look forward to hearing the results. 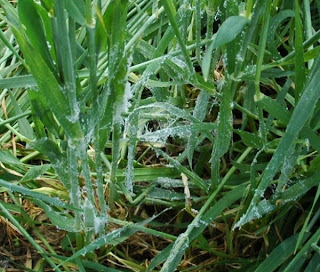 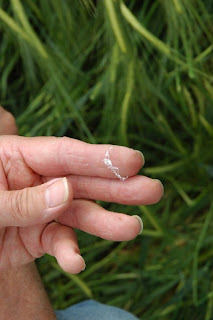 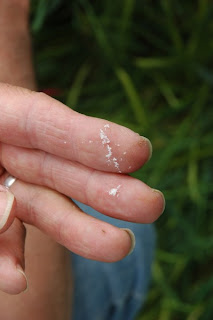 None of us felt that we should venture beyond the tramlines as the crop was laid so lightly. It was very unusual, not at all like the usual clearly defined areas of laid and standing crop. This was almost like half the crop was downed loosely and the other was still standing and the two merged into one another. Using the analogy of colour, most crop circles are black and white whereas this one is definitely gray. Without the aerial photos it would be hard to imagine that this would look anything other than a mess from the air. The lay appeared to form a spiral clockwise out from the central standing stems. This continued forming a large disc that has a ring surrounding it, the whole being about 30 metres in diameter. 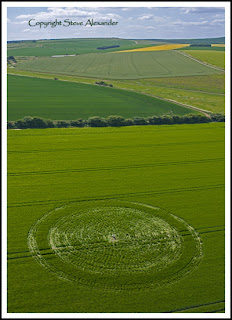 Thanks to Steve Alexander of Temporary Temples for these aerial photos.
This is a lovely field in a gentle dip in the landscape with West Kennett Longbarrow on the rise to the west just one field away and half of Silbury Hill visible to the right of it. I looked to see if East Kennett Longbarrow was visible but it is over the crest of the hill to the east. I did wonder however if thic circle aligned with these momuments in any way. Back at the car I studied our detailed map of the area with a woman who had come to visit the circle and noticed that a line projected along the length of East Kennett Longbarrow going northwest would pass through the crop circle and continue on to tangent the right side of Silbury Hill. This is a rough calculation at the moment not having a GPS reading of the circle's exact location. We may have to climb Silbury to get a visual sighting. 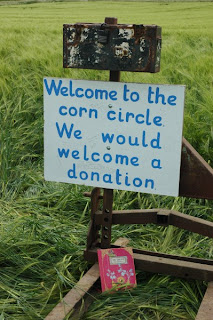 We were very pleased to see that the farmer had put up a donation box and was allowing visitors into his field, thankyou Mr Hues! Leaving this circle we went to try and see the ghost circle of last year's formation below the white horse at Milk Hill but the oilseed rape is now so high that the tramlines are impassable without a lot of effort so we abandoned this adventure.
It was now 6.15pm and we were in need of refreshment. Knowing that Richard at the nearby King's Arms at All Cannings wins awards every year for the quality of his locally brewed beer we concluded our trip with a well-earned pint and convivial conversation. 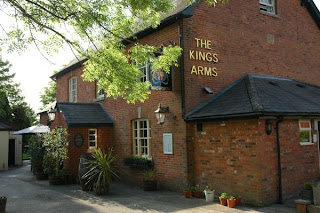 Having  spent the afternoon on a dragon energy line I thought it very appropriate to sample their seasonal beer - St George and the Dragon!
Cheers!
Posted by Glenn Broughton at 8:24 AM