The Western Isles of Scotland

People all over the world have heard of the Isle of Skye, Isle of Mull or Iona even though they are small islands off the coast of northwest Scotland (Iona is just 1 mile by 3.5 miles). This small isle with a serene atmosphere was the first Christian base in Scotland and still has an abbey, check out the sublime Nunnery Gardens - a wonderful place for meditation or reflection (great for photo ops too!). Iona may well have been a pagan ceremonial sacred site before Christianity because it sits on a leyline connecting it energetically with Callanish stone circles on the 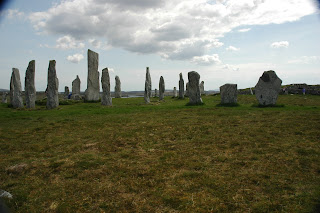 most northerly Hebridean island of Lewis.
'Scotland's Stonehenge' as Callanish is sometimes called has watched over this magical landscape for more than four thousand years. The site is truly awe-inspiring and it appears probable that it was designed and built around celestial alignments especially the moon. For this reason our Sacred Celtic Pilgrimage to the Highlands and Islands of Scotland in June will be visiting Callanish on the day of the midsummer full moon. We will celebrate the season and the gifts left to us by our distant relatives as we stand amid the towering megaliths under a ceiling of stars and watch ‘la lune’, full and ripe, gain her ascendance into the heavens… www.sacredbritain.com/scotland.html 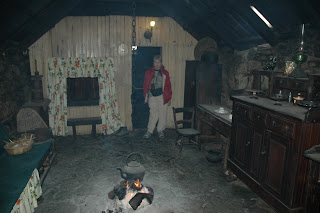 Dun Carloway Broch is a communal stone house that was inhabited two thousand years ago probably by an extended family and their animals. The Arnol 'blackhouse' is typical of earthen floor thatched roof dwellings brought to Scotland by the Vikings and used for hundreds of years right up until the 1960s. This low windowless house is just as it was left and the peat fire burning in the middle of the floor still produces smoke that killed any mites and bugs from the animals housed at the other end of the house.
Travelling between the islands on the local ferry boats gives the chance for 'birders' or 'twitchers' to look out for some of the many breeds of native birds found in the Outer Hebrides. Its also a great chance get some stunning photographs. 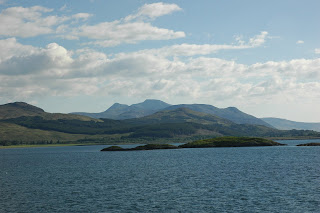 To be continued...
Posted by Glenn Broughton at 11:09 PM No comments:

In anticipation of the start of the new crop circle season here is a brief review of what happened last year. The numbers looked like this for reported formations-
Total worldwide 133
England 77
Italy 14
Germany 14
Switzerland 6
Canada 5
France 5
Poland 3
Czech Republic 3
Netherlands 2
Brazil 2
USA 2

The situation has changed over the years, appearing for the first time in new countries and reducing in numbers in the familiar countries. For example the Netherlands always used to have the second largest number after England and France didn't have them.
Of the 77 that appeared in England 60 were located in the county of Wiltshire, with the vast majority within a few miles of the landscape temple at Avebury. (This compares with 51 in England of which 39 were in Wiltshire in 2008.)
My research over the last fifteen years has led me to believe that crop circles need underground water in the form of an aquifer and powerful earth energy currents in order to occur. (Detailed article at http://www.sacredbritain.com/research-underground.html )
This makes Wiltshire the ideal location. I believe that the potentized land here was also the reason our neolithic ancestors chose this area to build such astounding structures as Silbury Hill, Avebury stone circle and Stonehenge. For more information on this read http://www.sacredbritain.com/ancientsites.html
Crop circles, sacred sites and earth energy are intimately linked.
Posted by Glenn Broughton at 9:01 PM No comments:

Welcome to our new blog. The idea of this blog is to enable you to join us in our explorations of the crop circles and sacred sites in England and Scotland this summer. We are in England from May 1st - Sept 1st '09. If you dont know us we are Glenn and Cameron Broughton and we operate Sacred Britain Tours. You can see the tours and dates we are offering this summer at http://www.sacredbritain.com/

Not everyone can make a trip to Britain but lots of people have asked if they could come in our luggage so here's our way of saying "Sure, jump in!"
We'll be posting reports several times a week, as we have new exciting discoveries to share. Blogging is very new to us so it'll be a journey of discovery - just like our tours. We have a plan of where and when we'll be but the crop circles are unpredictable so we have to go with the flow. Apparently we can even text reports and photos to this blog from within a crop circle or standing inside Stonehenge at sunrise using our cell phone!

So please add us to your favourites and come and join us in the fields. It promises to be an exciting summer.
With love
Glenn and Cameron
Posted by Glenn Broughton at 10:26 AM No comments: