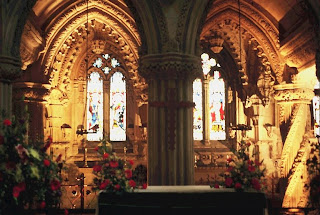 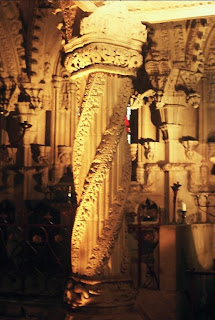 Today our Sacred Celtic Pilgrimage started with a visit to the remarkable Rosslyn Chapel close to Edinburgh. Our expert guide Margaretanne explained many of the puzzles that surround the mass of stone carvings that adorn the interior of this enigmatic fifteenth century chapel. It was built by a member of the Sinclair family who still own the building today and has many connections to the Knights Templars, the mysterious society who were attacked by the Catholic church in the early fourteenth century. Some of those who survived found safe haven in Scotland because the king of Scotland had already been excommunicated by the Pope.
Because of the popularity of The DaVinci Code visitor numbers to the chapel have increased more than five hundred percent in recent years, so a new visitors centre is being built. Also the huge renovation project to preserve the chapel is still underway and the large protective canopy covering the whole building will remain there for another year at least allowing the building to dry out slowly while the roof is recovered.
There are so many mysteries surrounding the building - is the ark of the covenant hidden in the sealed crypts? does it prove North America was visited long before Columbus 'discovered' it? what secrets did the Templars discover in Solomons Temple in Jerusalem? what do some of the puzzling carvings mean? and did Jesus marry and have a child?
Temple
Following our visit to Rosslyn we explored the ruined 'kirk' (church) at Temple, once headquarters to the Knights Templars. The surrounding churchyard contains many old gravestones with Templar carvings such as the skull and crossbones. Our group decided to say a prayer to honour the Templars and the legacy they have left us, and to send healing back in time. The atmosphere of this place was very tranquil and peaceful, the sun was shining and the birds were singing - Scotland at its best.
Tomorrow we head towards the Highlands!
Posted by Glenn Broughton at 5:23 PM No comments:

The area around Waylands Smithy and the Uffington White Horse has become a regular venue for crop circles in recent years and although its in Oxfordshire its only just over the border from Wiltshire and about 20 miles north from Avebury. For field reports go to www.cropcircleconnector.com
-
We have now started our Scottish tour and are in Edinburgh tonight. Tomorrow we'll report on our visit to Rosslyn Chapel and Temple.

Posted by Glenn Broughton at 1:34 PM No comments: