Power of Stone and Water 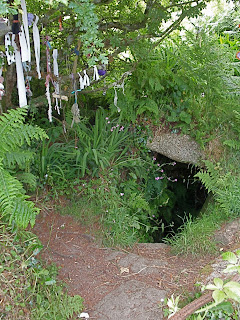 Here is a lovely example of ancient knowledge being passed to us down the generations. Writing in AD 1200, Layamon recalled an even more ancient folk memory when he described a ritual use of Stonehenge in his poem "Brut" -
The stones are great
And magic power they have
Men that are sick
Fare to that stone
And they wash that stone
And with that water bathe away their sickness

Why would they think to do such a thing?
Reverence for flowing water as a sacred entity was once a worldwide attitude. Today it is only found in native cultures and ‘new age’ thinking. The problem arises when we look at water as merely a physical substance and only look at how it is physically needed by living organisms. There is much more to water if we see it as energy.

We find gems of truth in folktales if we take the time to interpret the symbolism. For example, it is said of several stone circles that the stones go down to the water to drink at midnight or on a full moon. This folktale speaks of the connection between the stone circle, Earth energy and underground water. It is now known that there is underground water present beneath every sacred site in the world. In fact, dowsing shows that most sites are animated by the serpentine currents of electromagnetic energy which course through the ground following the subterranean streams of water, and which vary according to the seasons, the phases of the moon and even day and night. All holy wells have stories of healings attached to them. When we realize that strong Earth energy currents have turned the waters into something akin to a homeopathic remedy, these folktales make perfect sense.

Our ancestors also understood the energetic properties of stone. The stone circle builders utilized primarily crystal-studded granite or sandstone blocks. Both stones have a quartz crystal content of over ninety percent. We are all aware that our wristwatches and computers operate because of the energetic properties of their silicon chips. Well silicon is the same thing as quartz. So the circle builders chose these energetic stones in order to have control over the build-up of earth energies in the stones and within the space they enclosed. Tom Graves compared them to acupuncture needles in his book ‘Needles of Stone.’
Here are two ways of looking at it.
Left-brained
The Earth is a huge generator with a crystalline iron mass core spinning at 1100 miles an hour ringed by a gravitational field. The resulting electromagnetism that is generated makes its way to the surface via geological fault lines, beds of crystalline rock or underground watercourses. The water rises under pressure towards the surface but is often blocked by a ‘dome’ of solid impervious rock that diverts the water laterally. However the energy, having no physical substance, carries on vertically to ground level where it is detectable as an energy hotspot or vortex. The frequency of this energy is approximately 8 hertz, the same as our brainwave emissions when we are in a deep meditative state. Place a crystalline stone in the ground at this point and –bingo, you have a healing stone.
OR…
Right-brained
The Earth is alive and is our mother, creating us, nurturing us and taking us ‘back home’ at the end of our lives. All life comes from Gaia, or the goddess, she is the great giver of life. The underground streams of life-giving water are her blood supply maintaining her well-being and nourishing all life on the planet. She sends vitality to all parts of her body through potent currents of energy that we can access for healing and spiritual purposes. Her breath is our breath and we share the same heartbeat and pulse. If we honour her we honour ourselves, if we abuse her we abuse ourselves.
So now re-reading Layamon’s poem it makes perfect sense. The only question is ‘Why don’t more of us still perform these ceremonies?’ Will sacred sites ever look the same again?!

The Celtic year was divided into eight segments of equal length. The winter solstice (shortest day of the year) and summer solstice (longest day) divided the year into two halves. The spring and autumnal equinoxes (days of equal length day and night) then divided it into four quarters. These quarters were then bisected by the major sabbats or festival days of Imbolc, Beltane, Lughnasadh and Samhain.


We are now approaching the fire festival of Imbolc traditionally celebrated on February 2nd or the full moon nearest to it. Imbolc in gaellic means 'in the belly' and some have said this is because we are approaching lambing time, whilst others take a more spiritual perspective and say it means 'in the belly of the goddess' or the Earth Mother and refers to the growing new year that was conceived last November at Samhain or the growing light that started to make a return from midwinter day. 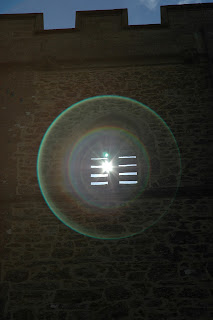 It is also known as Brigid or Bride's day in honour of the Irish goddess of poetry, healing and smithcraft. The Christian name is Candlemas, not surprising when we realize that Brigid was also a goddess of fire and a perpetual flame was kept burning at her shrine in Kildare. Hilltop fires were lit and candles placed in windows of every house.
Corn Maidens or Dollies were fashioned from corn or wheat and were then dressed up and placed in a cradle or 'Bride's Bed'. These were then kept all year as a symbol of abundance and fertility. The homefire was extinguished for the first time all winter and the ashes raked smooth before going to bed. In the morning the ashes were examined for marks of Bride's passing through the house as a blessing and then the fire was rekindled as a sign of a new start or rebirth.

In northern New England, from where I write this, it seems inconceivable that new growth or even the beginnings of Spring could be marked by this festival as we still huddle up against sub-zero temperatures and the skiing season still has a long way to run. However, in Celtic Britain where I was raised and have spent most of my life, February is an exciting month for gardeners as this is when the first seeds of broad beans and garlic cloves can be planted out into the earth. It is also when snowdrops and crocuses thrust up through the earth and come into flower, the first signs of new growth in the new year.

So it is appropriate to celebrate by lighting a fire or a candle and having a celebratory meal to give thanks for the blessings of the dark winter now passing and to welcome the return of the light and new life. We can also do the same for our inner life giving thanks for the time of reflection and self-nurturing during the hibernation period and starting to sow the seeds of our wishes and dreams that we will nurture in the coming months and welcome into our lives later in the year.

Blessed be.
Posted by Glenn Broughton at 9:47 PM