Oceanhorn Comes To PS4 And Xbox One!

Soon, console gamers around the world get to start their adventures in Arcadia as Oceanhorn is coming to PS4 and Xbox One!

The console version is based on the remastered PC version and porting is handled by extremely talented Engine Software (Terraria, Mighty No.9) and FDG Entertainment. The console version of the game actually runs on PC's Ultra settings, targeting Full HD and 60 frames per second. That is a true testament to the involved team's skills! 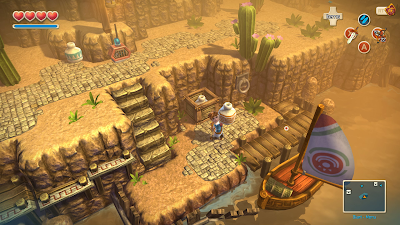 If you're more familiar with Oceanhorn's mobile version, here is a citation of the remastered version's features:

Oceanhorn's PC version is a completely remastered version of the game, a huge graphical and technical overhaul, that makes the game more suitable for bigger screens and more powerful hardware.

The game has been redesigned for physical controls and it plays great on your gamepad!

All of the game's graphical assets have been tweaked for the powerful platform. We added four times more polygons, sharper textures, normal maps, detail objects and new lighting effects such as dynamic ambient occlusion, soft shadows and realtime reflections to make Oceanhorn look stunning when played in Full HD resolution

We have also read every review and feedback out there to improve the original game all around. We have remastered puzzles and taken care of spots that felt confusing or unfair for the players.

There are some new items in the shop that will hit the nail with people's demands. Second Chance Potion might be expensive, but you will be lucky to have it in a boss fight and Mana Refill Potion will be a priceless possession in Frozen Palace. What could be the function of the Ancient Arcadian Radar, though?

Oceanhorn console version will be released this summer on Playstation Store and Xbox Games Store. We will make sure to tell you more closer to the release date!
Posted by Glenn Broughton at 4:49 PM