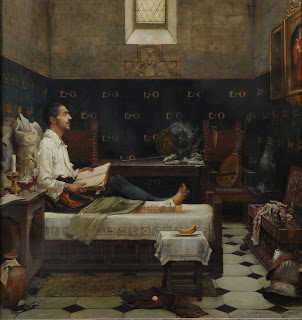 I was recently in Loyola, on a brief pilgrimage to the birthplace of the holy founder of the Society of Jesus, St. Ignatius. While I was there I was able to take in the 'chapel of conversion' where Iñigo famously moved beyond the romantic and chivalrous works of fiction he so loved and found lasting happiness in the lives of the saints and of the saviour himself.

The works of fiction weren't evil, Iñigo wasn't reading trashy novels or pornography magazines, he was reading tales that were essentially about virtue, great human qualities, but ultimately forces solely directed to worldly ends, transient goods that pass and fade with the evening.

The hunger that they instilled in him for adventure, for limit experiences, for romance, these desires weren't bad, but they weren't an end in themselves, they prepared him for something greater, and when he found the thing that was the greatest, the One Who is the greatest, He was able to find the answer to the thirst that God had placed within Him, and which the novels ultimately had helped him appreciate.

So, with this in mind, I turn to computer games and I realise that the best a video game can ever be is a distraction from the mundane of this life which serves to remind me that life is about adventure, only the greatest adventure is the adventure of holiness, of striving for sanctity, of snatching souls from the fire and of desiring to traverse the whole world in order to bring great glory for Almighty God.

Ignatius put down the novels and He started living an adventure greater than anything he had found in them. Switch off the XBox, unplug the Playstation, shut down the Nintendo Switch. We might not be called to the same soaring heights of sanctity as Ignatius of Loyola but we can certainly learn from Him where true heroism lies and how the greatest of human virtues and talents and fantasies that we cultivate must be channeled towards the absolute and fundamental course in life- the Way of the Lord Jesus Christ.